Comedy can be deadly serious,
And tragedy laughably compelling,
That’s the rub, they’re often the same,
They just have a different spelling,
One is the walker, whistling away,
The other is the .

Excerpt from THE LITTLE BOOK OF BAR ROOM BANTER

IN BRITAIN UP NORTH IT’S GRIN

In six days the world was created,

On the seventh came demarcation lines,

One of these is a stretch of hills,

They separate men from madmen,

They divide the East from West,

The White Rose from the Red Rose,

And we argue which is the best,

Yet regardless what we’ve got or not,

What makes us all up north delighted,

Is that we’re Northerners, not Southerners,

And a truth that we revere,

The body is marvelous for turning,

Your attractive, uncomplicated head sits on top of a long, sleek neck that adorns an hour-glass-figure.

With come-on curves fondled by men and women alike (quite often in public too), you don’t care who picks you up or who is doing the fondling, just so long as they turn you on.

Scratch marks feature down your front as well as down your back, which you display as a badge of honour.

When made love to, the tone of your moods can swing from a screaming banshee to a sparrow’s sigh, from a lava flow to a morning frost, from a Death Star explosion to a Firefly’s wing beat.

Some partnerships last and some don’t. Either way, you know you exist to be exploited, for giving pleasure and making money is your forte.

You’ve no choice in who wants to play with your emotions. This isn’t a worry as long as after any casual or intense session you’re not ignored and you’ll be called upon again, soon.

As a respected member of one of life’s oldest professions, making a little sweet music is your simple aim.

To appear in my next publication

A STAR IS BORN

Picture the scene as a stretch limousine
pulls-up alongside to deliver a dream,
The window winds down, you smile from a frown
as a mover and shaker from Tinseltown,
States boldly that: “If you’d like to act,
stardom could be yours and that’s a fact,”
Is this for real, just what is the deal,
who cares as long as it buys the next meal,
You wine and dine at Hollywood and Vine
where a contract is given for you to sign,
Reaching your goal, you’re on the payroll
but the studio system now owns your soul,
Yet, hey, so what, you’ve hit the jackpot
soon you’ll be working the movie backlot,
When oh the thrill when one might trill:
“I’m ready for my close-up Mr De Mille,”
Then come a new dawn a star could be born
to those sat watching whilst eating popcorn
… cue
Bogart, Monroe, Gable, Jean Harlow,
Errol Flynn, John Wayne, Chaplin, Greta Garbo,
Whereas now the words that actors begird
are: “Ready when you are Mr Spielberg”,
As long as payments for artist’s engagements
have been agreed by Hollywood agents,
Indeed, to succeed what artists all need
are agents who are never shamed by greed,
To bring the influx of vast megabucks
and no more needing to give an “aw shucks”,
As a stretch limousine completes the scene
of delivering you to a silver screen,
Where in the fame game there’s only one aim
– above the title must appear your name
… cue
Meryl, De Niro, Denzil, Pacino
Nicole, Whoopie, Emma, Tarantino,
All winning thereafter an Oscar or Bafta
and hoping it ends “Happy ever after…”

Happy ever after, ha, what laughter,
‘cos what all wannabes need to factor,
Is nothing can tame the monster that’s fame
that’ll either help make or break your name,
But that is a tale of which to regale
upon leaving rehab – or possibly jail,
‘Til then, though naïve, you’ve got to believe,
a La La Land journey is what you’ll achieve,
But cruel happenchance said “sod romance”
to La La Land’s input of song and dance,
Forgotten never, a showbiz error,
brought dramatic and comedic terror,
When a backstage dope and wrong envelope
meant Hollywood history had to cope,
With the Oscar spotlight turning its sight
to shine on the true Best Picture Moonlight,
And such a screw-up you couldn’t make-up
which a watching world all gladly lapped-up,
Then came Parasite, a left-field delight
which briefly put diversity right,
And #Me Too fears turned to loud cheers
when the casting couch got 23-years,
But failings aside what can’t be denied
when it comes to movies, we love the ride
… cue
E.T. Stagecoach, Titanic, Star Wars,
Ghost, Pulp Fiction, Black Panther, Jaws,
Taxi Driver, Psycho, Singing In The Rain,
Casablanca, Bridesmaids, Citizen Kane,
Nothing else measures these big screen pleasures
these unforgettable movie treasures,
Because getting our kicks what else licks
the magic of watching the good old flicks.

(Excerpt from POETRY IN MOTION PICTURES)

WE ALL NEED OUR OWN SPACE 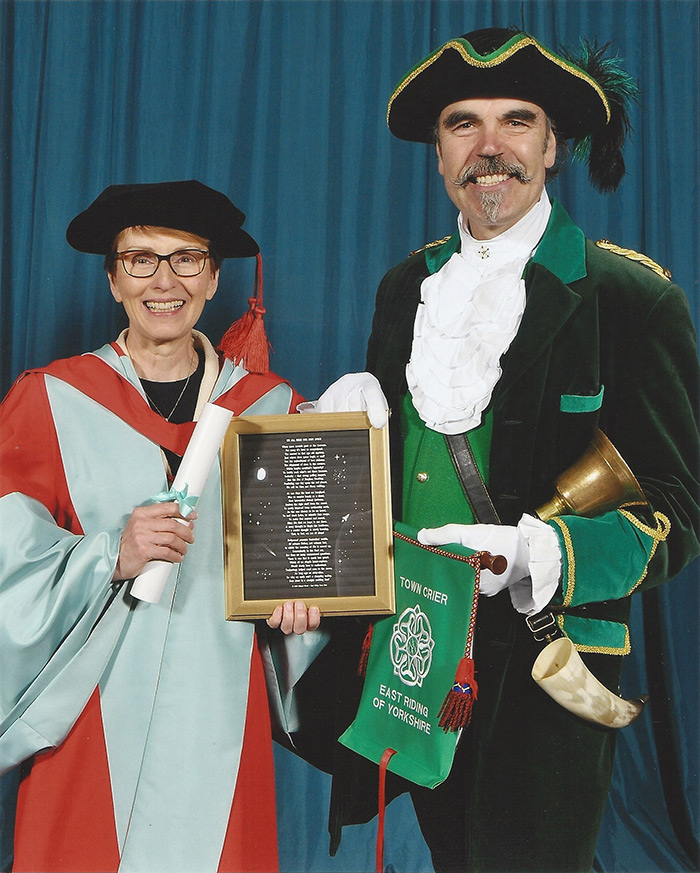 Michael with Helen Sharman, the first Briton in space.

When mere mortals gaze at the heavens,
For many it’s hard to comprehend,
The answer to that age old mystery,
Just where does space begin or end?
Cue the embodiment of true alchemy,
The alignment of stars in the cosmos,
Which inspire mankind’s ingenuity,
To want to explore what’s out there because,
Curiosity – that strong pulling magnet,
Has the like of Stephen Hawking,
Predicting one day upon the red planet,
We will be Mars and not Moon walking.

Once the best that we could imagine,
Was wandering lonely as a cloud,
Now interstellar distant horizons,
Beckon the right stuff from the crowd,
To coolly blast-off from mothership earth,
As the one chosen to be on board,
To surf black holes, to wheelie time warps,
To make first contact and record,
Alien life that we hope is out there,
A scary thought to tingle the backbone,
But a scarier thought is surely learning,
That, in fact, we are all alone!

Hollywood presents fantastical worlds,
Of science fiction, not science fact,
In which the meaning of life is served up,
Conveniently in the final act,
But from so many unanswered questions,
There is one that is much less grand,
Which all we simple homo-sapiens,
Would dearly love to understand,
Technology helped send men to the moon,
As long ago as sixty-nine,
So why on earth can’t a shopping trolley,
Ever steer in a straight simple line?